Posted on December 11, 2018 by HumanisticPaganism

In PaGaian Cosmology, and sometimes explicitly expressed in other traditions, Winter Solstice/Yule essentially celebrates the Birth of All, Origins (capitalized because it needs to be noted as a sacred and ultimate event). Winter Solstice is a good time to contemplate Creation stories. Here is one – a Poem from Jami 1414, with an image (from my ritual space – I call Her Radha):

From all eternity the Beloved unveiled Her beauty in the

solitude of the unseen;

She held up the mirror to Her own face,

She displayed Her loveliness to Herself.

no eye but Hers had surveyed the Universe.

All was One, there was no duality,

The vast orb of Heaven, with its myriad incomings and

outgoings, was concealed in a single point.

The Creation lay cradled in the sleep of non-existence,

The eye of the Beloved, seeing what was not,

Although She beheld Her attributes and qualities

as a perfect whole in Her essence,

Yet She desired that they should be displayed to Her in

And that each one of Her eternal attributes should become

manifest accordingly in a diverse form.

Therefore She created the verdant fields of Time and Space

and the life-giving garden of the world,

That every branch and leaf and fruit might show forth Her

The cypress gave a hint of Her comely stature,

the rose gave tidings of Her beauteous countenance.

… better than some Creation stories you have heard I bet. This Creation story/poem is kin to this one – told by Starhawk in The Spiral Dance p.40:

Alone, awesome, complete within Herself, the Goddess, She whose name cannot be spoken, floated in the abyss of the outer darkness, before the beginning of all things.And as She looked into the curved mirror of black space, She saw by her own light her radiant reflection, and fell in love with it. She drew it forth by the power that was in Her and made love to Herself, and called Her “Miria, the Wonderful.”

Their ecstasy burst forth in the single song of all that is, was, or ever shall be, and with the song came motion, waves that poured outward and became all the spheres and circles of the worlds. The Goddess became filled with love, swollen with love, and She gave birth to a rain of bright spirits that filled the worlds and became all beings.

But in that great movement, Miria was swept away, and as She moved out from the Goddess She became more masculine. First She became the Blue God, the gentle, laughing God of Love. Then She became the Green One, vine-covered, rooted in the earth, the spirit of all growing things. At last She became the Horned God, the Hunter whose face is the ruddy sun and yet dark as Death. But always desire draws Him back toward the Goddess, so that He circles her eternally seeking to return in love.

All began in love; all seeks to return to love. Love is the law, the teacher of wisdom, and the great revealer of mysteries.

Is this how Creation happens? … or may happen? I find it more appealing than the image offered on the ceiling of the Sistine Chapel … the point of a god’s index finger. I also find it interesting that these stories of parthenogenetic creation have been told as part of the human understanding of Origins. Is there something more here? and what is it? Are they stories that tell of the time in the unfolding of the Cosmos, the epic of evolution, when mitosis was the mode of reproduction (I prefer a less mechanistic term like “regeneration” if you will understand what I mean)? And/or do these stories reveal a shamanic capacity that has been lost in these recent millennia – clues of which may be found in ancient texts if one comes to them with a female friendly frame of mind (such as in the work of Marguerite Rigoglioso in this book The Cult of Divine Birth in Ancient Greece), and also seen in creatures who can still do it occasionally: the question is simply “what occasion?”, but humans are generally to scared  to ask these days.

Here is another Creation story in image form: 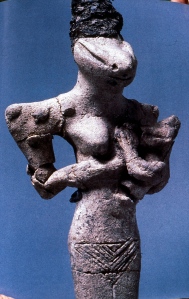 I name Her Tiamat, because She is named thus in the reference – as below:

Adele Getty, Goddess: Mother of Living Nature, London, Thames and Hudson, 1990, p.33. It is from Ur 4000 – 3500 B.C.E., and Adele Getty says:”… this Babylonian Goddess presents an ancient and haunting image of the sacred mother. Holding her child to her breast, she stands upright like Tiamat, the dragon woman, naked except for her magic belt of triangles, which serves to emphasize as well as beautify her own fertile delta. The triangle represents the triple aspect of the Great Goddess as Maiden, Mother and Crone, and is recognized in the Tantric tradition as the primary symbol of life. The serpent force is the great  life-affirming, maternal blessing. The snake is always associated with immortality … .

And of note: “Tiamat” is the name Thomas Berry gave to the supernova that birthed our Solar system. Ref: Swimme and Berry, The Universe Story, several references in the Index.

This ancient image of the ubiquitous Mother and Child in the Season of Winter, which has been adapted and co-opted into the tradition of Christmas (but the Mother’s gaze there is most often upon the child, not direct like this one), surely represents something essential about the human sense of eternal creation – eternal Cosmogenesis, the pulse of Creativity: something essential about the nature of the ever-unfolding Universe. It is worth deep contemplation and gazing. Perhaps it is in the direction of the cosmogenetic quality of deep bondedness, the relational reality in which we dwell – which in these times is even becoming a field of scientific research (and Charlene Spretnak has written about that: Relational Reality).

I love this image of Tiamat, as an image of eternal Cosmogenesis, as the ancients must have understood it, and as we may understand it anew in our times with all our added scientific understandings. And it may express the essential Communion experience that this Cosmos is, the innate and holy Care that it takes, and the reciprocal nature of it: that is, how one is always Creator and Created at the same time. We cannot touch without being touched at the same time. We are in-formed even as we give/create form.

In our times, we are required more than ever, to give birth to a New Era, because we are in the midst of the ending of the 65 million year Cenozoic Era (See Thomas Berry and many others for what is meant by that). Much is unknown, unpredictable. We need to pay attention, have the courage of both Mother and Child, to participate in the shamanic creative act of birthing New Being.

For a PaGaian Winter Solstice Meditation:

Glenys Livingstone Ph.D. has over thirty years experience on a Goddess path, which has included diverse spiritualities and a scientific perspective, inner work as well as academic scholarship. Her studies have been in theology, ritual, archaeomythology, social ecology, psychology, sociology and education.

Glenys is the author of PaGaian Cosmology: Re-inventing Earth-based Goddess Religion, which was an outcome of her doctoral work in Social Ecology from the University of Western Sydney. Glenys’ doctoral research was an experiential study of the three phases of the Triple Goddess – Virgin, Mother, Crone – as Creative Cosmological Dynamic, and the embodiment of Her in seasonal ritual as a catalyst for personal and cultural change. More recently, Glenys’ continued ritual practice of the seasonal Wheel of the Year and research, has deepened her identification of this Cosmic-Organic Creative Triplicity with the Triple Spiral engraved by the ancients at Newgrange (Bru na Boinne) in Ireland.

Glenys grew up in country Queensland Australia. Glenys considers herself a student of the Poetry of the Universe – a language expressed in scientific story, mythological metaphor, ancient and contemporary images of integrity, body movement and dance, stillness, chants and songs. By these means, she conducts geo-therapy – ecological reconnection – for herself and with others.

Glenys’ M.A. is in Theology and Philosophy and included education in liturgical practice at the Jesuit School of Theology Berkeley California. She lives in the Blue Mountains west of Sydney with her beloved Taffy (Robert) Seaborne, who is also a graduate of the School of Social Ecology and rich life experience. Glenys teaches, writes and facilitates the seasonal rituals in her Place with an open community.

← Loneliness in Naturalistic Pagans, by Kansas Stanton
As the Solstice Approaches, We Again see the Power of our Star →