This Historic Moment (Part I), by [Starstuff, Contemplating]

Posted on August 4, 2017 by HumanisticPaganism 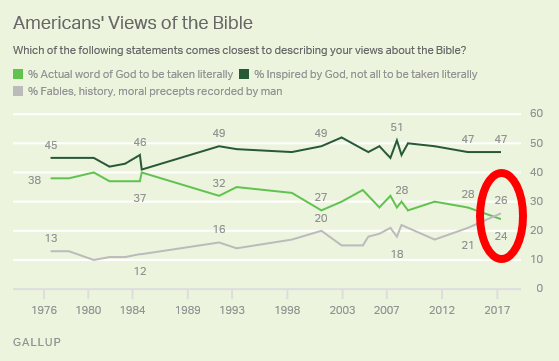 Not all that long ago, three times as many people saw their chosen Bible as the actual word of their god, to be read literally as those who saw their Bible as a book of fables.  For the first time in American history, more Americans see their Bible as a book of fables than the literal words of a god (because there are many different books called a “Bible” – some with 81 books, or 66 books, or 73 books, or other books, with different texts in those books, I try to avoid referring to “the Bible” – because there isn’t just one “Bible”, and the canon has never been settled, and probably never will be settled, even among Christians).  This historic point was crossed just this May, and is, as we’ll see, not alone.

If you had asked me decades ago if I’d live to see this day, I wouldn’t have seen it as even a remote possibility.  And before that, for nearly all of American history and for many centuries before that in Western countries, to even suggest that a sane person could doubt that this or that Bible was the literal word of a god would get you shocked looks at best (if not physical harm).  And yet, here we are!  Like so many other similar areas, the pace of change in the past century, and especially in the past couple decades, has been unbelievable.

Next Year, and the year after that

One could look at the direction this has gone over the past three decades and predict that it will continue.  But an even better basis for thinking that this trend will continue is looking at the demographics shown in the same poll.  Specifically, the highest level of Biblical literalism are found in those above the age of 65, and among those under 30, only 12% see their Bible as the literal word of a god.  Turning past years on their head, nearly three times as many of those Americans under 30 see their Bible as a book of fables than as the literal word of a god!

Looking at the graph, I can’t help but wonder how people most often free themselves of the shackles of literalistic belief.  For instance, I’m sure that some of them jump right from literalism to rejection of the Bible as being from a god at all, in one step, when they find the many problems in the Bibles and simply can’t maintain the cognitive dissonance any longer.  Some undoubtedly shift over many years, gradually going from biblical literalism, to accepting some metaphor and being a liberal Christian for years, then slowly dropping their belief in their Bible as the word of a god altogether.  But how many of each type?  For those millions of Americans in the “Fable” category, which story is more common?  I think that with these data, it could be mostly either way, or an even share of each.  I’ll let  you know if I find anything that provides that information- and please let me know if you come across some first.

Traditional religion, of course, brings both good and bad aspects to the lives of it’s adherents.  Many of those good things, such as community, shared spiritual experience, rites of passage, and more, are completely independent of superstitious and supernatural belief.  As so many people, of all ages and in all areas of the country, flee a literal Bible, they will still have many of these very human needs.  How many of them will work to build naturalistic religions of various kinds?  Some will stay in Christianity, being silently Naturalistic Christians.  Others will strike out in other areas, maybe becoming Naturalistic Buddhists, or anything else (we are talking about millions of people, after all).  Some will be the Naturalistic Pagans who will read these posts here and on other Naturalistic Pagan blog sites (such as NaturalPagans.com), and feel a little less alone.  As Naturalistic Paganism and other naturalistic approaches to religion grow, I hope that they find fulfilling spiritualities that enhance their lives and build a better world for all.

Heather is a parent and a scientist raising her four children to explore the world through scientific understanding and with spiritual appreciation of the Universe. She has a Master of Science degree in Physics from Michigan State University, a Bachelor of Science degree in Aerospace Engineering from the University of Michigan, and a Bachelor of the Arts degree in English Literature, also from the University of Michigan. She teaches physics as an adjunct instructor at Delta College, runs the Math Mania program at a local elementary school, has worked at Dow Corning as an engineer and at NASA as an intern, and she has led science outreach workshops for K-12 students through joint programs between NASA and the University of Michigan. She is a naturalistic non-theist, whose faith has been shaped by her childhood within the Episcopal Church, her adult membership in the Unitarian Universalist church, and through Buddhist meditation.  She has a passion for bringing science and spirituality to everyone in a fun way, both for her own family and for the wider community of the Earth.  She is a co-author with Jon Cleland-Host of Elemental Birthdays: How to Bring Science into Every Party.

← Happy Summer Thermstice/Lammas!
[Dead Ideas] “Titoism I: Slovenia from Prehistory to Tito”, by B. T. Newberg →

One Comment on “This Historic Moment (Part I), by [Starstuff, Contemplating]”